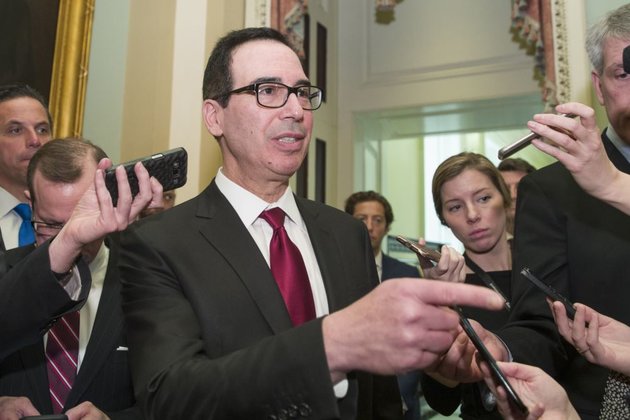 But Trade Representative Robert Lighthizer has resisted the idea, and the proposal had not yet been introduced to President Donald Trump, according to the Journal.

U.S. stocks advanced on the news even as a Treasury spokesman working with the administration's trade team denied the report.

'Neither Secretary Mnuchin nor Ambassador Lighthizer have made any recommendations to anyone with respect to tariffs or other parts of the negotiation with China,' the spokesman said.

'This an ongoing process with the Chinese that is nowhere near completion.'

Chinese Vice Premier Liu He will visit the United States on Jan. 30 and 31 for the latest round of trade talks aimed at resolving a bitter trade dispute between the world's two largest economies.

In December, Washington and Beijing agreed to a 90-day truce in a trade war that has disrupted the flow of hundreds of billions of dollars of goods.

Lighthizer did not see any progress made on structural issues during those talks, Republican U.S. Senator Chuck Grassley said earlier this week.

The Trump administration is scheduled to increase tariffs March 2 on $200 billion worth of Chinese goods to 25 percent from 10 percent.

The timeline is seen as ambitious, but the resumption of face-to-face negotiations has bolstered hopes of a deal.

Industrial stocks, which have been sensitive to trade developments, jumped 1.4 percent after the Wall Street Journal report.