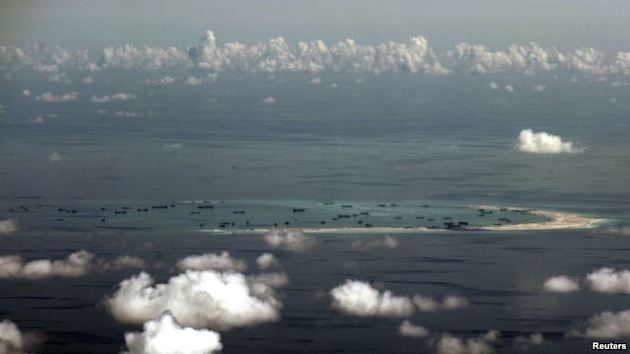 The Philippines plans to sign a strategic partnership agreement with Vietnam, paving the way for the two countries to boost maritime security cooperation in the face of contentious territorial disputes with China in the South China Sea.

Philippine Foreign Affairs spokesman Charles Jose said this week the pact will be signed on the sidelines of the Asia Pacific Economic Cooperation (APEC) summit, a three-day event opening Monday in Manila.

Vietnam has not yet confirmed Jose's announcement and details of the deal have not been made public. But officials from both sides have previously said the agreement, which the two sides began negotiating last year, is likely to be comprehensive and include trade as well as maritime coordination and cooperation.

Attorney Ta Van Tai, former research associate and lecturer at the Harvard Law School, said it's obvious that Vietnam is getting closer to the Philippines because of Beijing.

"South East Asian countries are not scared of each other. They are afraid of the lsquo;big boy,' China," he said. "Seeking alliance with the Philippines is a right move by Vietnam."

Tai added that bolstering ties with the Philippines will also help Vietnam get the attention of the United States, a longtime ally of Manila that has already increased maritime aid to Hanoi.

Vietnamese officials repeatedly have expressed their foreign policy of not siding with other countries to counter any third nation.

The Philippines is the most vocal among claimants in contested waters against Beijing. Manila has filed a legal case before the International Tribunal for the Law of the Sea disputing Beijing's claim to waters and land features in parts of the South China Sea.

The international arbitration court, which China boycotted, has ruled it has jurisdiction in the case.

Vietnamese Prime Minister Nguyen Tan Dung visited the Philippines last year, while relations between Vietnam and China soured over a controversial Chinese oil rig that was placed in disputed waters.

In the presence of the host's president, he said the two countries "shared deep concerns" over China's "violations of international law" in the South China Sea.

Meanwhile, Hanoi has dismissed an earlier statement made by Chinese President Xi Jinping over disputed islands.

Foreign Ministry spokesman Le Hai Binh reaffirmed that "Vietnam has full legal and historical evidence for its indisputable sovereignty over" the Spratly and Paracel Islands.

In a speech in Singapore last week, Xi said that islands in the South China Sea "have been China's territory since ancient times" and that "the Chinese government must take responsibility to safeguard its territorial sovereignty and legitimate maritime interests."

He made the remarks shortly after a state visit to Vietnam.

In addition to Vietnam and the Philippines, China also has competing South China Sea claims with Brunei, Malaysia and Indonesia.

This report was produced in collaboration with the VOA Vietnamese service.

TEHRAN (Tasnim) - Joe Biden did a better job in the final debate on Thursday, according to a CNN Instant ...

Ireland locks down as second wave of virus sweeps through Europe

Bahrain collaborating with Israel for more than decade, says report

MANAMA, Bahrain - Israel has been operating a secret embassy in Bahrain for more than 11 years, according to a ...

Last week, the Iranian-flagged oil tanker Samah entered the Mediterranean Sea via the Suez Canal. After a few miles, the ...

New Chinese train will run at 400 kilometres an hour

Photo taken on Oct. 21, 2020 shows the new type of high-speed train which can run on different rail systems ...

China's Bilibili to join BBC Studios in production of documentaries

This week the United States Department of Justice (DoJ) filed a lawsuit accusing Google of using "anticompetitive tactics to maintain ...

Although global trade is making a frail recovery, the outlook remains uncertain, UN trade and development body UNCTAD said on ...

California recently announced that it plans to ban the sales of gas-powered vehicles by 2035, Ontario has invested $500 million ...

A time for borrowers to restructure loans and other debt obligations

JAKARTA, Indonesia - The economic impact of coronavirus crisis has been perceived. We have seen hundreds or even thousands of ...