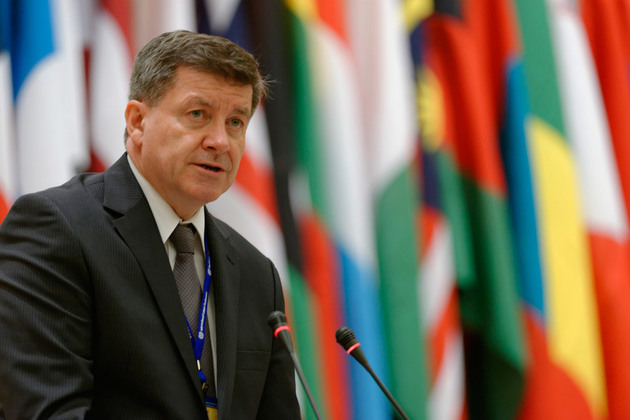 15 May 2015 -- The International Labour Organization (ILO), in a statement issued in the wake of this week';s deadly shoe factory fire in the Philippine capital, noted "often such accidents are preventable" and offered its assistance to improve safety and health conditions in the workplace.

"I was greatly saddened by the news of the deaths of dozens of workers in the shoe factory fire in Manila," ILO Director-General Guy Ryder said. "On behalf of the International Labour Organization (ILO), I extend my condolences to the bereaved families and share in their sorrow."

"Once again, we find ourselves mourning workers whose lives have been cut short as a result of workplace accidents," Mr. Ryder said. "Often such accidents are preventable."

The reported death toll in a fire on Wednesday that destroyed a shoe factory in the Philippine capital has risen to 72, according to news reports.

In the statement issued the following day, Mr. Ryder noted that "everyone has the right to work in a safe and healthy environment, regardless of the industry they are in or the type of work that they do."

"We can make workplaces safe by improving working conditions in factories, including carrying out regular inspections to ensure that factories comply with structural, fire and electrical safety; and by ensuring workers' rights, especially freedom of association and collective bargaining," the statement said.

It went on to say: "As always, the ILO stands ready to assist, working with employers, workers and their organizations and all stakeholders to improve safety and health conditions in the workplace."

ILO also noted that despite the Philippines' rapid economic growth, working poverty has only declined by one per cent in five years.

Issuing a separate statement, the Geneva-based UN Working Group on business and human rights noted that the Philippines fire echoed another recent tragedy at a garment factory in the region, and underscored that "the lessons of the Rana Plaza disaster have still not been learned."

"The tragic death of factory workers, mainly women, is a stark reminder of the urgent need for action to protect workers in the garment industry, despite of the Bangladesh Accord for Fire and Building Safety, created two years ago, on the same date as the Manila shoe factory fire," said Michael Addo, who currently heads the expert group.

The collapse of the Rana Plaza building with more than 3,000 garment workers inside in 2013 was a wake-up call for action by governments, trade unions and industry to address systemic human rights issues in the garment sector. "This week';s factory fire in Manila must strengthen our resolve to call for action to prevent such accidents from taking place," Mr. Addo noted.

The Bangladesh Accord is a legally binding agreement which has been signed by over -- corporations from 20 countries, global and local trade unions, non-governmental organizations and workers' rights groups.

The Rana Plaza disaster also led to progress, supported by the ILO, on labour law reform, labour inspection, workplace safety and compensation for injuries to take steps to strengthen inspections of working conditions in factories. Government efforts have been undertaken in collaboration with the Accord and with another initiative, the Alliance for Bangladesh Worker Safety, led by 26 mainly North American companies.

"The Working Group commends such collaborative actions to find practical solutions to the address health and safety risks. Yet, it recalls that there are many cases of human rights abuses by business enterprises in which victims are unable to access justice and where impunity prevails," the expert said.

"We urge States and the business community to be more pro-active to ensure safe working conditions for workers in the garment and textile industry, to avoid a continuous repetition of these preventable tragedies," he stressed.

"The Working Group calls all States and businesses to take all necessary measures at the national, regional and international level to prevent future business-related harm, protect rights on freedom of association and collective bargaining, and provide for effective remedy for victims," Mr. Addo said.

The group of human rights experts also expressed their profound sadness and condolences to the families of the factory workers who lost their lives in the Manila shoe factory this week.

TEHRAN (Tasnim) - Joe Biden did a better job in the final debate on Thursday, according to a CNN Instant ...

Ireland locks down as second wave of virus sweeps through Europe

Bahrain collaborating with Israel for more than decade, says report

MANAMA, Bahrain - Israel has been operating a secret embassy in Bahrain for more than 11 years, according to a ...

Last week, the Iranian-flagged oil tanker Samah entered the Mediterranean Sea via the Suez Canal. After a few miles, the ...

New Chinese train will run at 400 kilometres an hour

Photo taken on Oct. 21, 2020 shows the new type of high-speed train which can run on different rail systems ...

China's Bilibili to join BBC Studios in production of documentaries

This week the United States Department of Justice (DoJ) filed a lawsuit accusing Google of using "anticompetitive tactics to maintain ...

Although global trade is making a frail recovery, the outlook remains uncertain, UN trade and development body UNCTAD said on ...

California recently announced that it plans to ban the sales of gas-powered vehicles by 2035, Ontario has invested $500 million ...

A time for borrowers to restructure loans and other debt obligations

JAKARTA, Indonesia - The economic impact of coronavirus crisis has been perceived. We have seen hundreds or even thousands of ...